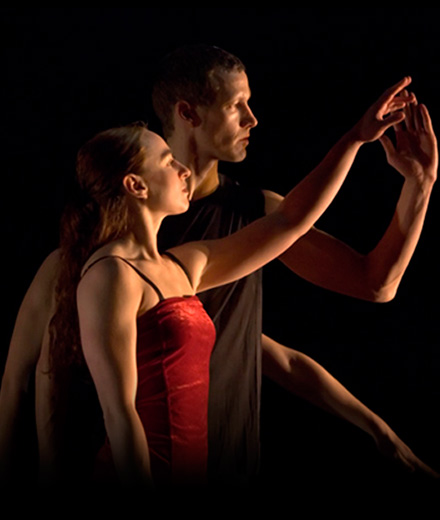 “Memorable choreography…best are stop-motion images of the dancers, which have a ghostly effect, as if the walls were movie screens for spotty memories of the dance…shifting, sculptural…strong.”
Brian Seibert, The New York Times

“There was something redemptive about (the) piece…it felt as if by the end, you acknowledged that despite everything, we are all part of a flow –life’s journey.”
Christine Jowers, The Dance Enthusiast

“Rebecca Stenn Company is a collective force …keenly pleasurable. They are smart, adult dancers and to watch them thinking through deft spatial patterns and often tricky partnering sequences is a treat.”
Claudia La Rocca, The New York Times

“As I watch the piece’s skillful unraveling, marked by a focus on the juxtaposition between projected and physical identity, it becomes clear that this work is going to be illuminating—revealing secrets about the body and perceptions of time through photography and movement.”
Emily Skillings from Fran Kirmser Productions Reviews

“Rebecca Stenn is a thrilling, hypnotic contemporary dancer and choreographer. Half-lit and shrouded in black, she moves tentatively like a shadow, governed by instinct, seemingly alert and cat-like as though ready to pounce. Fluid and ethereal, Stenn’s movement echoes the half-world between sleep and consciousness.”
Edinburgh Skinny Shimmy

“In Zone A, the collaboration of Rebecca Stenn and composer Konrad Kaczmarek created one of the most satisfying and memorable new danceworks I’ve seen in the past dozen years. Rebecca Stenn moved thru the aural (musical) dreamscape with a kind of weighted lyricism that was fascinating to watch…Rebecca uses her hands with remarkably fluent clarity. Rebecca and Konrad received sustained applause – deservedly – having held the audience enthralled.”
Philip Gardner, Oberon’s Grove

“Stenn moves with incredible softness in her upper body that rests so well against Alice Hwang’s live piano accompaniment of Chopin’s Nocturnes. Her movement with Charlie Chaplin footwork and bird-like wafting arms is animalistic, as Stenn as the first creature of the night plays alone in the quiet.The partnering sequences are particularly memorable, well-produced and executed. I wanted a ball-of-the-foot swivel partnered turn between Stenn and Pollard to go on forever.”
Laura Di Ori, Dance Informa Magazine

“In terms of pure choreographic invention — on her own body and for ensembles — Stenn was the most rigorous American choreographer of her generation. Rebecca Stenn, as performer…has her own aura and glow. She is luminous. Possessed. Enchanted. On one of the first occasions I saw her…I thought of what it must have felt like to watch Martha Graham perform. This is how Stenn transfixes; she doesn’t need to insist on the spotlight; it finds her.”
Paul Ben Itzak, Dance Insider

“The Rebecca Stenn Company dancers gave a moving and thought provoking performance of “Fantasy, Lies, Hubris, and Voyeurism” on Saturday evening at the West End Theater. Rebecca Stenn began the piece; alone in an open-back black dress, beautifully lit, standing in front of a projection of clouds and landscape. Her movements were arcing, swaying, fluttering; a force of nature confined…the vision is striking.”
Deborah Wingert, Eye on Dance

“Stenn, in Drinking the Sky, captured my attention and held it rapt from her very first assured, masterful movement to the dimming of the lights. The impressively muscle-bound yet amazingly graceful Stenn is totally in control of her body, articulating her hands, arms, feet, legs, ribs and neck separately in sometimes round and fluid, sometimes sharp and direct motions. To me, Stenn’s performance was astounding.”
The Edinburgh Shimmy Skinny

“There is plenty of physical prowess on show and some strong musicality and control, particularly from solo artist Rebecca Stenn, demonstrating impressive isolation and detail.”
Edinburgh Spotlight

“With six world-class American dance companies taking to the stage with Booking Dance’s showcase, Beautiful, it’s difficult to know where to begin. Fans of dance will be delighted by the smorgasbord of talent on show. First on to the stage at the EICC is Rebecca Stenn, presenting a piece she has choreographed herself, Drinking the Sky. To the accompaniment of Chopin, she contrasts elements of classical ballet with modern moves that could be pulled from today’s street dancers, commenting on the past moving forward through the present and the future.”
Edinburgh Festivals Magazine

“Deliciously intense… in the audience we are breathless.”
Brooklyn Rail

“[The] pieces are attractive and well-made… the performers are all accomplished. Successful…the choreographer’s style shines through”
Deborah Jowitt, The Village Voice

“Stenn moves like a gazelle, and out of her muscle bound stance, she exudes a melodic beauty, whether wafting through the air in “Zimzun” or clomping onstage in Li’l Abner boots as a fiery seductress in “The Carmen Suites”. Her choreographic imagination showed boundless versatility…she exerts an.electrifying presence.”
Phyllis Goldman, Backstage

“In the rising choreographer’s striking new evening length work…the organic, expressive movement is poetic in its own right. Sometimes the dancers touch each other’s bodies like healers, but there is wrestling too, and fast, full out dancing over satisfyingly big spaces.”
The New Yorker

“Stenn is known for the way she inserts live music and musicians into her dancing, and this creates remarkable moments, visually and physically. A duet for dancer Eric Jackson Bradley and cellist Dave Eggar is unlike anything I’ve seen. It’s a trio really, two men and a cello. The men’s ebb and flow, weight exchanges with each other and the instrument that seems almost to play itself at times, or to initiate the movement, are impeccably timed.”
The Danceinsider

“Honest is the word that settles in my mind as I walked away from Rebecca Stenn Company’s Blue Print…breathtakingly beautiful…the innovative way in which the musicians participated in the dance made the show unique, and the themes of belonging, relationship, and home brought out through the poetry gave the experience a deeper emotional quality. “
Exploredance.com

“Stenn and four other terrific dancers execute the work…”
Village Voice preview, Voice Choice – pick of the week for Dance

“Stenn’s performance was a splendid meshing of tender vulnerability and physical presence.”
Dancemagazine

“Stenn is a choreographer of generous vision…the evening offered one gem after another of visual and movement imagination…achingly beautiful…daring and successful.”
The Philadelphia Inquirer

“Rebecca Stenn is one of the most gifted and innovative young dancer/choreographers in modern dance.”
St. Louis Post Dispatch

“Stenn is a fine dancer, notably strong and precise. Humor and rhythmic energy give her work a life of its own.”
The Village Voice

“A fresh, vital dance company in a remarkable debut by a stunning dancer/choreographer. Stenn’s dancing is strong and passionate… she brings down the house.”
STAGES, The National Theatre Magazine

“Rebecca Stenn is a master of physical illusion. Her expressive face accentuates the clean, striking lines she achieves (and) her leaps are so fluidly executed that it appears as if she is dancing through liquid.”
The Buffalo News

“Sophisticated…Rebecca Stenn is a creative force. Tenacious discipline and exacting work…Stenn’s uniqueness is in her kinetics and brilliance of concept…a dancer of ability and imagination.”
MaAriv Israeli News

“Captivating and consistently excellent, Stenn’s choreography balances the sublime and beautiful with humor and thus involves the entire audience, whether dance afficionados or not. Her strength and beauty offer a unique dance experience that is filled with promise for the future.”
CHRW radio, London, Ontario, Canada

“Brilliant…stunning…visually exciting…Stenn shone in the inventiveness of her choreography.”
The Virginian Pilot

“Stenn’s choreography is breathtaking…right on the money.”
David Rubens, The Santa Barbara Independent

“From the beautiful to the provocative…Perks stretches the limits of agility and emotion. Each piece is the product of the harmony and chemistry between the dancers and musicians…highly enchanting.”
The Sheboygan Press

“In her piece “The Carmen Suites,” inspired by the Bizet opera, Rebecca Stenn and her PerksDanceMusicTheatre have reached a level few companies have…startlingly, tellingly. What Stenn has done is expand the Pilobolan-Momixian form to the point where every single “trick” or “gimmick” or prop promotes and instigates and ignites a pure dance.”
The Dance Insider

“Gorgeous and Poetic”
The Village Voice