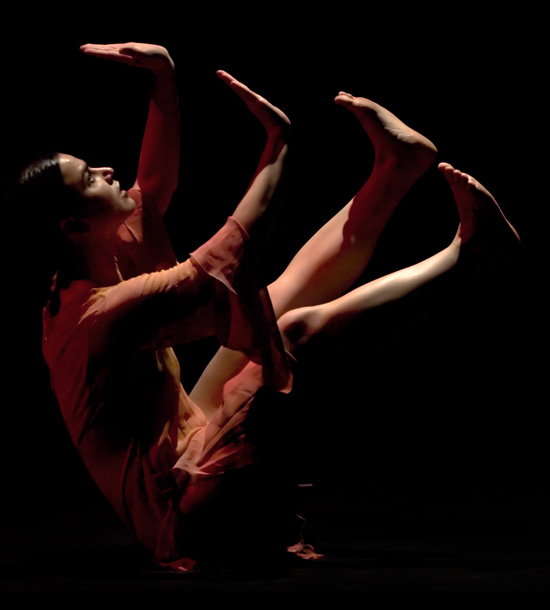 Acclaimed as a “rising choreographer” by the New Yorker and “vibrant, potent and darkly imaginative” by the New York Times, Rebecca Stenn, dancer, choreographer, educator, author, founded Rebecca Stenn Company in 1996. The company has since performed to critical acclaim and sold out houses in over 50 cities including such venues as The Copenhagen Festival, The Edinburgh Festival, The Joyce Theater, BAM Fisher, The Kitchen, Danspace Project and Jacob’s Pillow Dance Festival among many others. The company has received support from the National Endowment for the Arts, The New York State Council for the Arts, The Joyce Theater Foundation, and the American Music Center and has been hailed in The New York Times as “a collective force…keenly pleasurable”. Recent performances include a return to the Edinburgh Festival, The Joyce Theater Family Matinee series, and solo performances at the Rubin Museum.

Stenn’s love for collaborations with live music comes from her years at the Interlochen Arts Academy and later the Juilliard School, where she earned a BFA in dance. More recently, Stenn graduated Summa Cum Laude from University of Wisconsin Milwaukee, with her MFA in Dance and Performance. As a principal dancer with MOMIX from 1989 to 1996, Stenn performed in over 30 countries and throughout the U.S. and appeared as a featured performer in films for Italian, Spanish and French television. Also with Momix, Stenn assisted in the choreography of and performed as a principal dancer in Lina Wertmuller’s production of Carmen at the Munich Stats Opera, was a featured performer in the first ever 3D Imax film, Imagine, and assisted in the choreography of the Emmy Award Winning PBS Special, Pictures at and Exhibition. Stenn is a founding member of Pilobolus Too with whom she toured throughout the world from 1996 to 2002, creating and performing numerous works for the repertoire and a piece for the Radio City Rockettes

Stenn performed as a solo dancer in Jaron Lanier’s PBS special Musork – Postcards From New York. Also with Lanier, she created and performed the evening length piece Thinning of the Veil at the Kitchen. Stenn choreographed the U.S. premiere of the opera Leap Over the Shadow at the Lotte Lehman Theatre in Santa Barbara, California, of which David Rubens of the Santa Barbara Independent wrote, “Stenn’s choreography is breathtaking…right on the money.” Most recently, Stenn choreographed the new, multi-media opera Cracked Orlando, at the Juilliard School. Other choreography credits include an evening length solo performed with the Da Capo Chamber Orchestra at Columbia’s Miller Theater in New York City, an evening length collaboration with Squonk Opera and Attack Theatre premiered in Pittsburgh, an Off Off Broadway production of The Wild Party and three productions with Vision Into Art, premiered at Lincoln Center. She has been the Choreographic Mentor for the National Young Arts Foundation and with them has choreographed numerous performances presented at the Kennedy Center.

Stenn has been has been a contributing editor at Dancemagazine, has published work in the International Journal of Dance and the Brooklyn Rail and most recently co-authored the newly released book, A Life in Dance: A Practical Guide. Stenn is currently on faculty at The New School and Princeton University and is Choreographer-in-Residence at Dartmouth College. She has enjoyed Artist in Residencies at numerous university and college programs including Barnard College, Montclair State University (New Works Award) and University of Wisconsin (Alumni Award) among many others. Stenn most recently performed a new duet at BAM Fisher, and recently created and premiered the final evening length work in a trilogy for Rebecca Stenn Company, which was premiered June 2018 at the Gowanus Loft. She is currently working on a commission from Women In Motion, to be premiered spring 2020. Stenn is the proud mother of Jonah and Elie Weissman.