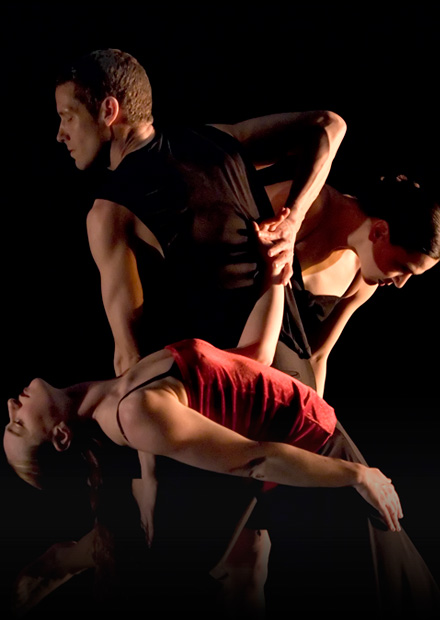 Rebecca Stenn (Artistic director, choreographer, dancer) has had the incredible good fortune to be surrounded by the inspiring and spirited group of people that make up Rebecca Stenn Company. Her love for collaborations with live music comes from her years at the Juilliard School, where she earned a B.F.A. in dance in 1990. As a member of Momix Dance Theatre from 1989 to 1996, Stenn toured extensively throughout Europe, the Far East, South America, the U.S. and Canada and appeared in films for Italian, Spanish and French television. Stenn assisted in the choreography of and appeared as a featured performer in the Emmy Award winning film Pictures at an Exhibition, a PBS, Dance in America Special. She appears in one of the first 3D IMAX films Imagine, which was released worldwide in 1994. She has collaborated with Moses Pendleton in the making of Passion, and assisted in the choreography of Lina Wertmuller’s Carmen at the Munich State Opera, also performing as a principal dancer. Stenn is a founding member of Pilobolus Too, a duet company formed by Pilobolus Dance Theater. With Pilobolus Too she has created numerous works for the repertoire including a piece for the Radio City Rockettes, and has taught residencies at universities, elementary and high schools, and programs for the deaf and blind. With Jaron Lanier, she choreographed and starred in the award winning PBS film Musork. Other choreography credits include the U.S. premiere of the opera Leap Over the Shadow in Santa Barbara, a commission from the Neuberger Art Museum at Purchase College, and frequent collaborations with Attack Theater and Vision Into Art at Lincoln Center. Stenn has taught master classes throughout the U.S. and Europe. Fall of 2000 and 2001 she was the artist in residence at Barnard College, creating two works for the students. A teaching artist for The Joyce Theater, she continues to teach residencies at the Lincoln Center Open Stages Program, and is on faculty at the New School in New York City. Stenn can be seen in Julie Taymor’s upcoming movie Across the Universe. She has been a contributing editor at Dance Magazine, and has written for the International Journal of Dance. Stenn is the proud mother of Jonah and Elie Weissman, whose father is known to play bass for the company.

Eric Jackson Bradley has danced and made work in the New York dance scene and internationally since 1987. He has worked with Bill T. Jones/Arnie Zane Dance, Noemie La France's "NOIR" for the Whitney Biennale, and in Alexandra Beller's new piece "You Are Here" premiered at the Yard. He has also worked with Susan Marshall Company and has performed his own work developed with dancer, Leila Zimbel at the Men Moving series at Dixon Place in New York. Bradley also incorporates elements of music and choreography structure to the work he does in floral and decor design.

Dave Eggar (Resident co-composer/cellist) has performed internationally as a solo cellist and pianist. Engagements this season have included Carnegie Hall, Chamber Music Society of Lincoln Center, The Barbican Center Concert Hall in London, the Hollywood Bowl, Stuttgart Bach Festival, LACMA, Lincoln Center Festival and many others. Mr. Eggar has performed and recorded with artists such as the Who, Michael Brecker, Dave Sanborn, Josh Groban, Trans-Siberian Orchestra, Kathleen Battle, Dianne Reeves and many others. A founding member of the FLUX quartet, Mr. Eggar is a graduate of Harvard University and the Juilliard School.

Trebien Pollard (Dancer) is a graduate of Florida A&M University with a BS in Mathematics Education and received his MFA from NYU Tisch School of the Arts. He is an accomplished performing artist, choreographer and teacher. Trebien has performed with many dance companies, including Martha Graham Ensemble, Pascal Rioult Dance Theater, Pearl Lang Dance Theatre, the MET (Metropolitan Opera Ballet), Urban Bush Women, Ronald K. Brown/Evidence and Pilobolus. As a choreographer, his work has been performed throughout United States, England and Japan. Currently, he is an Assistant Professor of Dance at Adelphi University.

Jay Weissman (Resident co-composer/musical director, bassist) has composed for and performed with such diverse artists as Pilobolus, Hubbard Street Dance Chicago, Squonk Opera, Flux, and Perry Farrell of Jane’s Addiction. His compositions have been featured at Lincoln Center, The Joyce Theater, Joyce Soho, Merkin Concert Hall, Jacobs Pillow Dance Festival, as well as the Andy Warhol Museum in Pittsburgh. He has enjoyed many years on the road with an array of rock bands. And even deeper down than the orchestra pit, Jay has an event production company called the Usual Suspects with four other partners, and they secretly rule the world.

Jodi Kaplan (Set design) Having proudly represented Rebecca Stenn’s company touring for the past eight years, Jodi Kaplan is delighted to make her NYC debut as a set designer on Blue Print. She recently joined the Screen Actors Guild and welcomes this opportunity to collaborate creatively with Rebecca Stenn. Artistically, Jodi has also enjoyed working with Rebecca Stenn in her film projects – Rebecca is featured in Jodi’s dance film Immersion which has screened at festivals worldwide including the World’s Fair in Portugal, New Directors/New Films at MoMA, the Metropolitan Museum of Art, the Brooklyn Museum of Art, MassMoCA, and a mini-retrospective at the Smithsonian’s Hirshhorn Museum. Jodi is a recent recipient of a Jerome Foundation grant to shoot her next project, a boxing dance film entitled In The Blood. And she has currently embarked on a feature film exploring ritual dance around the world, a collaboration with photographer Lois Greenfield. Visit www.jodikaplan.com for more film info. And visit www.bookingdance.com for more dance info.